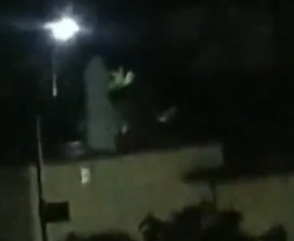 Video of a white-clad “ghost” walking on the rooftops of Varanasi has gone viral, causing panic among local residents.

Police have registered a case against unknown villains at Bhelupur Police Station.

Ramakant Dubey, Inspector of Bhelupur Police Station, said: “People are scared. Following their complaint, we filed an FIR against unknown persons and intensified patrols in the area.” The chaos started a few days ago when a video of the VDA colony in the Badi Gabi area went viral on WhatsApp, in which a shadow could be seen.

Three more such videos later surfaced on social media, adding to the panic.

Some locals said the video looked real, while most thought it was a fake video.

“It appears to be a fake video, but there is great fear among the locals, so we decided to contact the police to investigate the matter and reveal the truth,” said Suresh Singh, a local resident.

Meanwhile, DCP has appealed to people that no such incident happened in Varanasi and asked them not to forward such viral videos.