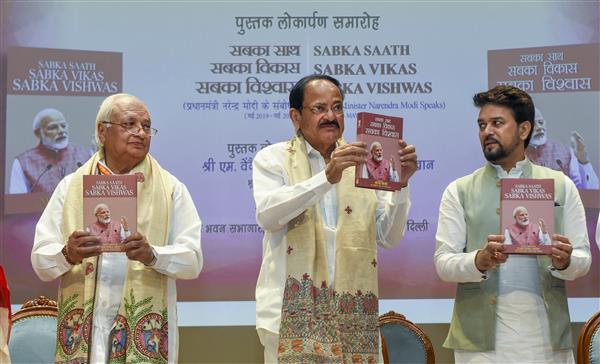 Former Vice President M. Venkaiah Naidu on Friday said Prime Minister Narendra Modi should meet more frequently with political leaders from all sides, which could help clear up some “misunderstandings” by opposition parties about his methods.

Speaking on the Prime Minister’s speeches at the launch of a book, Naidu praised his achievements in various sectors such as healthcare, foreign affairs and technology, claiming that the world is now recognizing India’s rise.

“India is now a force to be reckoned with, its voice is now being heard around the world. In such a short span of time, it’s not an ordinary thing. This is because of his actions, the guidance he gives to the people and the strides India is making,” Naidu said after the release of the book, titled Sabka Saath, Sabka Vikas, Sabka Vishwas – Prime Minister Narendra Modi Speaks (May 2019-May 2020)”.

Naidu said that despite the PM’s achievements, some parts still have some reservations about his methods “because of some misunderstandings, maybe some political constraints.”

“Over time, these misunderstandings will also be cleared up. The prime minister should also meet more and more sections of the political leadership … this side and that,” said the former vice president.

Khan commended the prime minister for passing legislation banning the practice of the triple talaq among Muslims.

He said even the first prime minister, Jawaharlal Nehru, said his biggest regret was that he could not legislate to alleviate the problems faced by Muslim women.

“Nehru could not make the bold decision to bring justice to Muslim women. Modi dared. We won’t understand the significance of that decision until decades later,” Khan said.

Thakur said the book, released by the publications department, focuses on 86 speeches by the prime minister on various subjects.

Mother’s Unique Campaign: In six years, eight thousand women from 50 villages participated in a special campaign in Naxal affected areas to save their...