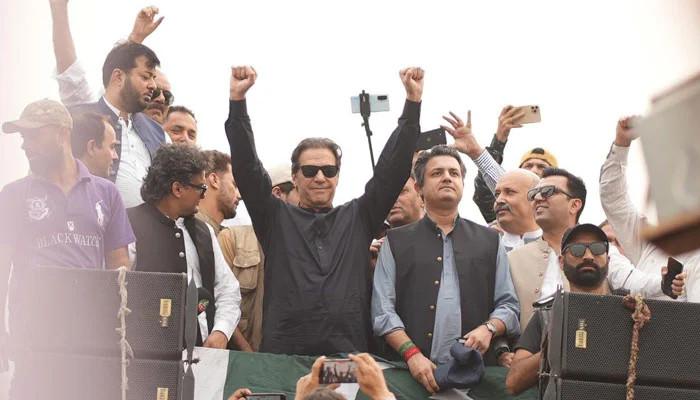 During the hearing on the petition to issue NOC for PTI’s rally and sit-in, an intelligence report was submitted in the Islamabad High Court, which states that Imran Khan is likely to be attacked again during the rally.

The court ordered that Tehreek-e-Insaf take permission from the administration for the rally and sit-in.

A hearing was also held in the High Court on a plea by local businessmen against the closure of roads due to the PTI sit-in.

The lawyer told the court that Ali Nawaz Awan is the petitioner in the case who is not available today as he is out of town.

The Chief Justice asked that Pakistan Tehreek-e-Insaf outside the city? The court has only said that whatever has to be done should be done in accordance with the law.

Advocate General Islamabad replied that PTI people do not know when they have to come.

The court ordered PTI to inform the date and time of the rally and seek permission from the administration.

Islamabad High Court Chief Justice Aamir Farooq said that all this has to be decided by the administration, we have given only this instruction that you should decide on their request according to the law.

The assistant lawyer said that we will present the application to the administration today, Babar Awan will appear himself in this case, adjourning the hearing until Tuesday.

Chief Justice Islamabad High Court Amir Farooq asked what to do at the request of businessmen? Aren’t the roads closed yet? If a state does not accept the direction of the federation, then what will happen? What can the Federation do to manage the law and order situation?

Advocate General Jahangir Jadoon replied that the Federation could call up the armed forces under the Constitution.

The Chief Justice said that this matter has also come up in the Lahore High Court and some directions have been given, if they say that the roads will not be closed, then it is fine.

During the hearing, the intelligence report was presented in the court, where it is said that Imran Khan was afraid of attack during the rally.

Islamabad High Court Chief Justice Amir Farooq said that according to intelligence reports, there are fears of an attack on Imran Khan, it is the responsibility of the government and the state to keep this in mind, political and non-political parties have the right to protest. , ordinary citizens and business petitioners also rights that should not be affected, even in England protesters come to Downing Street, protest but don’t block the road, the High Court cannot take over the responsibilities of the Deputy Commissioner, if you affect by any order of the Deputy Commissioner, come to court.

The Chief Justice told the PTI lawyer that you have blocked GT Road, Motorway and other highways, you should also show responsibility.

The PTI lawyer replied that the party leaders must be consulted for a new application.

“The right to protest and the rights of citizens should not be affected.”

The petitioner’s lawyer, Sardar Taimur Aslam, told the court that containers were still standing on the roads of Islamabad.

The Advocate General said the containers were placed as a precautionary measure, they did not block the roads.

Chief Justice Amir Farooq said the money for the containers seized during the 2014 sit-in was paid 3 weeks ago.

The High Court adjourned the hearing till November 22 on the request of PTI’s counsel, directing the PTI to submit a fresh application to the administration for the NOC of the rally.