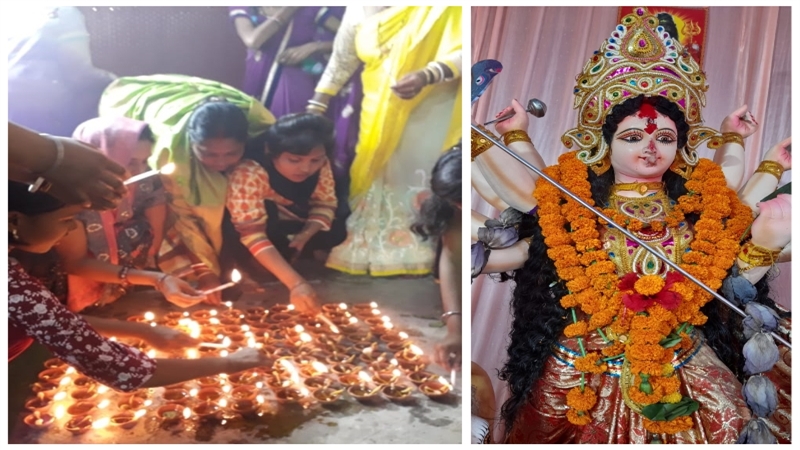 Bilaspur. A glimpse of Bengal’s Durga culture still exists in Sanskardhani. In 1923, for the first time, railway workers brought an idol of Goddess Durga in a goods train from Kolkata and celebrated it at Chuchuhiyapara. This tradition of West Bengal is seen all over the city today. That is why devotees from all over the country not only from Chhattisgarh come to perform Durga Puja in Bilaspur every year. Devotees are very excited for the Puja festival in Nyadhani. Preparations start four months in advance.

After Kolkata, if any place feels most special for Durgotsav, it is Bilaspur. The Bengali Association started it by celebrating Durgotsav for the first time in the railway sector. Their history is very unique. A hundred years ago Bilaspur was known only for its railway operations. Even today it is called John. There is direct rail connectivity to West Bengal and Maharashtra due to the Howrah-Mumbai route. Hence, a large number of workers from Bengal started coming here. It was not easy for him to leave everything and go to Bengal for Durga Puja. Some railway employees decided to perform Durga Puja here as well.

In this the most important contribution of Bhattacharya Dada is said. Some of the members went to Bengal to collect their bonus amount. From there, when the goods train reached the railway station with Maa Durga idol, people gathered. At that time it was under British rule and railway bungalows were not meant for employees. Hence, along the Chuchuhiapara line, the workers lived in a strip of huts. Together they built a pandal here and consecrated the idol of the goddess and celebrated the puja day. A large number of Bengali families joined it.

At present, puja programs are being organized in various places

The puja-festival continued at Chuchuhiapara. When the pandal was first constructed, railway school poles, sleepers and other iron materials were used. Most of them came from Kolkata. Over time Bengali communities were formed and puja ceremonies began to spread. Apart from Jagmal Chowk, Kalibari and now Hemu Nagar, most pandals in the city offer pujas according to Bengali culture.

Use of cloth in pandal

The Bengali Association carried the statue on a freight train for 25 years promoting its civilization and culture. Kolkata Kumartuli Regional Statues

is famous. There is a tradition of making idols from Ganga mud, then sculptors from Bengal and Odisha came here to make idols. It remains to this day. For the first time, the use of cloth by Batte in Pandals also started from this.

The glory is increasing every year

The grandeur of the Durga Puja festival in the city can be gauged from the spectacular pageantry, electrifying decorations, cultural programs and the splendor of the idols increasing every year. In more than 200 places, pandals are constructed every year. This culture and civilization is now greatly celebrated not only by the Bengali community, but by people of all communities embracing it with enthusiasm and enthusiasm.

– Now every year Ramlila and Mela at Bengali School Chowk

– Devotees flock to witness the Durga festival in Bilaspur