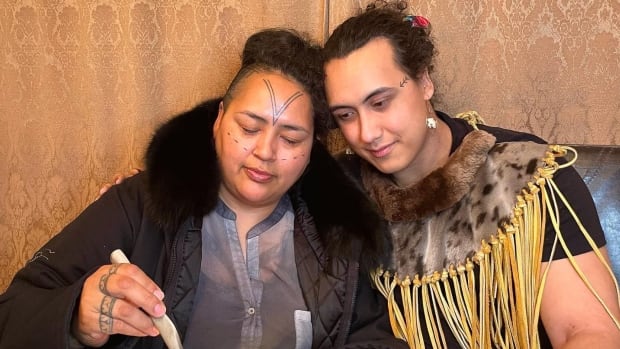 “Honestly, it’s kind of weird. It’s super cool, but when you really think about it, you’re like, wow, this is just crazy,” said Braden Johnston, who made the viral TikTok video with his mother, Hovak Johnston.

The 56-second clip, posted last month, shows Hovak demonstrating how to cut a piece of muktuk with an ulu, while a spellbound Braden looks on, almost visibly salivating. That’s all – there’s no clever editing, no music, no gags in this video, just a simple and sweet moment shared by mom and son.

“I was shocked when it hit a million views and then it just kept growing,” Hovak said.

The clip is by far the most popular they’ve made to date, but it’s representative of many of their other popular TikTok videos. The Johnstons use the platform to shed light on Inuit culture, but also on their own evolving relationship — one that hasn’t always been easy or healthy.

In fact, the two credit TikTok for helping them turn over a new leaf together.

“Well, our relationship is kind of complex. She didn’t start strong,” said Hovak. “We were mother and son that we couldn’t even be in the same room together for more than five minutes.”

Braden, who now lives in Calgary, described how the relationship began to change after he entered rehab as a high school student a few years ago.

“It was kind of like when we really started to make up and reconnect. It was my parents who gave me a safe space to heal that really allowed me to open up and find myself,” he recalled.

At the same time, Braden became more interested in his cultural identity as an Inuk. His mother, who now resides in Behchokǫ̀, NWT, proved an invaluable resource and inspiration.

“I learned so much from her in terms of what it means to be Inuit?” Braden said.

Hovak couldn’t be prouder. She says it was “really amazing” watching Braden learn and embrace his cultural heritage.

Other videos focus on things like sobriety, mental health and healing, and issues of Indigenous identity.

The couple began creating Tik Tok videos to explore and share Inuit culture together and with a wider audience. However, they soon realized that the audience was not only there for the muktuk, but also for their simple and often funny or touching interactions as mother and son.

“It started with us pushing each other to share our stories and knowledge, and it just so happened that the videos, which were unscripted — just showing us interacting, eating, sharing traditional foods — ended up being the ones who did what people ended up liking the most,” Braden said.

At the same time, the two found that the more videos they made, they became closer. They could spend a few hours together in the evening making a video.

“It builds up a lot of time spent together,” Braden said. “Especially when you’re talking about such intimate topics or being so vulnerable with such a big, big audience. It really helps you connect.”

“We also started cuddling because it was so personal,” Hovak added. “That’s how we got closer. And then he started teaching me how to give proper hugs.”

They’ve received a lot of feedback from people saying their videos inspire hope.

“There are many that can relate to our relationship in the sense that they too have struggled, like the parent and child who have struggled to connect and be patient with each other and find time together,” said braden

Hovak says she could never have predicted how her relationship with Braden has evolved and grown stronger and deeper.

“We’re going to capture it on video. Like, not on purpose – like, we didn’t plan on having it that way. It’s just our journey, but we’re going to put it on film.”

Tips for parents looking for antipyretic drugs for childrenNews WAALI