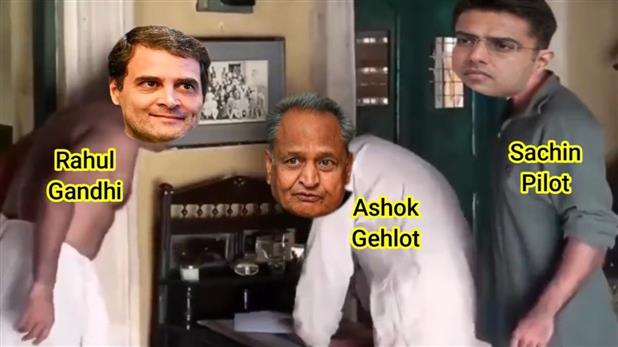 Political unrest in Rajasthan has reached unprecedented heights as Gehlot-backed MLAs have tendered their resignations amid speculation that the baton could pass to Sachin Pilot to lead the state as CM. The development came after it was reported that Ashok Gehlot would run for the post of Congress President, which would require him to give up the post of CM. Amid the chaos, microblogging site Twitter trended with #RajasthanPoliticalCrisis, #AshokGehlot and #SachinPilot.

With Congress grappling with some real excitement, netizens are in no mood to just let the topic go. Many across social media platforms have initiated a meme fest, poking fun at Congress while claiming how BJP is in the mood to reap the rewards of the crisis.

Thank you Congress for the wholesome entertainment.

This meme from 2020 is still relevant.

people out #Rajasthan wanna see #SachinPilot like Next CM but #AshokGehlot Brigade did everything they could to stop him.

But Gehlot is not ready to go like👇🤣 pic.twitter.com/D4NmtN67Eu

In Delhi, Congress calls on Kamalnath over the political crisis in Rajasthan. The same Kamalnath who failed to save his own government in the MP when he was CM. He was sent to sort out the situation in MH, the government went there too. He is a direct competitor of Burkha Dutt 🥲🥲#RajasthanPoliticalCrisis pic.twitter.com/hSpCCtyd3L